Within the extensive summer programming in Brittany, there is an important sub-category: the Breton culture festivals. From what I’ve been able to deduce, there are several main types of Breton festival including these: the religious Pardons honoring specific saints, the regional celebrations such as the Festival de Cornouaille, Fest Noz and other principally musical events, and those honoring traditional crafts. These appear to be quite popular events in Finistère Sud, a hot bed of traditional Breton culture.

Traditional Breton culture almost died out until undergoing a massive revival in the 1970s. It’s taken very seriously now, as these bumper stickers seen everywhere attest. “Breizh” is Breton for “Breton.” The headdress seen here, known as the “coiffe,” is one associated with the women of a certain area of Finistére, a “Bigoudène.” Every region, sometimes different villages within a region, has its own coiffe design. 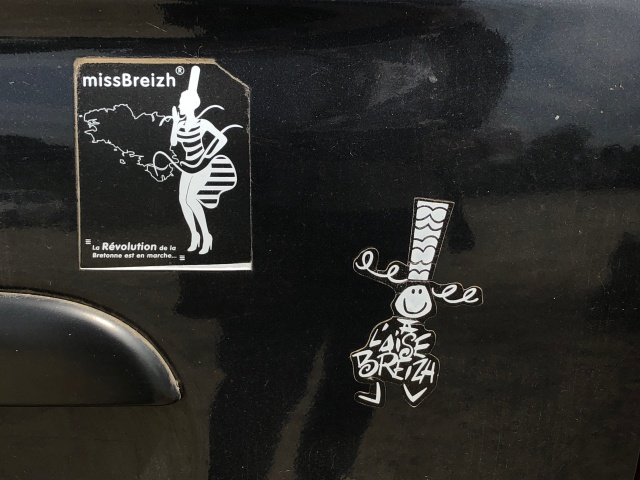 I attended the Festival des Brodeuses in Pont l’Abbé, at the end of its three-days’ run showcasing the intricate stitching and embroidery of the Breton costume. Participants wore costumes they or their mothers or grandmothers had made, and paraded through the small town before retreating to a public park where multiple stages held musical acts and festival goers sat at long tables under the trees with their cider and beer. The rousing Fireman’s bagpipe band was at my back as I waited in a long line for my buckwheat crepe. Good thing I like a good drone sound! Off on another stage, I could see a large band accompanying a dozen or so dancers. I was delighted to see these famous musicians in one of the parade bands.

Now, bear in mind that since I first saw Gauguin’s Pont-Aven paintings when I was in high school, I’ve been in thrall to them. However, until recently, it didn’t occur to me that one could still catch glimpses of what those Pont-Aven painters saw. As I mingled with the men, women and children before the start of the parade, I felt at times that I had crossed into the past, right into their paintings. 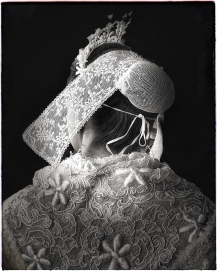 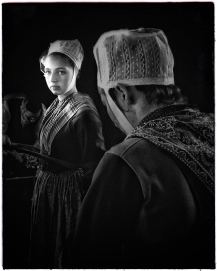 At the stands where individual “brodeueses” showed their craft, I chatted briefly with this expert. It turns out she is quite famous. 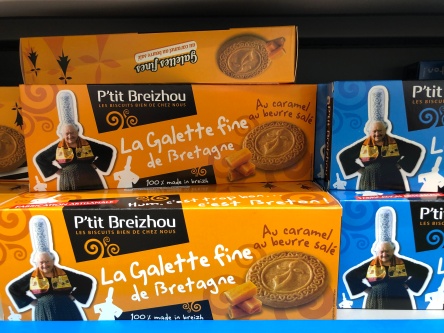 She is the last woman to wear the coiffe as part of her every day dress, and as such, a living symbol of the “Bigoudéne” culture. No doubt, it will live on as long as there are Bretons.

I spend as much time as possible pursuing my interests in global culture, photography, arts and politics.
View all posts by kmazz →
This entry was posted in Bretagne, Breton costume, Breton music, Brittany, culture, Finistère, France. Bookmark the permalink.