There’s a general perception that the French have more leisure time than Americans. This is true. Having more practice with it, they also perform it better, in my opinion. Holidays are not so scarce that citizens go hysterical (read: wasted) when they finally get them. Many are designed to be community, family-friendly events.

This season is a time of traditional outdoor festivities, often referred to as “animations,” starting with the June 21st Fête de la Musique. Every city and village in France celebrates the arrival of summer with music-making of some kind (“faites musique” means “make music” but it sounds like “Fête”, get it?).

Although the Fête was launched in 1982 nationwide as a way to recognize amateur musicians (of which there are very many across France), in large cities like Paris the programming largely involves professional bands and symphonies.

Here in western Finistère, in the days preceding the Fête, we drove past many handmade signs outside villages announcing their own music fest. You could have Fête-hopped the solstice all night long within a very confined geographical area. No one would have judged you, though, because at that time of year the sun doesn’t set until almost midnight and bonfires bring the dusk to a blaze as the musicians play their last. Why go inside?

“Les Bretons sont chauvins,” a local told me. Proud of their heritage, they are indeed. The Bretons use the fine seasonal weather to trot out their local sonneurs (players of cornemuses, binioux and bombards) at Celtic-themed musical fests called “Fest Noz.” I go mad for this folk life stuff, and finding fests nearby is one of my constant preoccupations.

Pig Roasts (cochon grillé) are also popular. They serve the same purpose as a Lions Club pancake breakfast, raising funds for a community. These don’t appeal to me personally, but they are traditionally Breton. In fact, let’s just say that vegans should really stay away from fish, cow, sheep, goat and bee product-based rural Brittany. 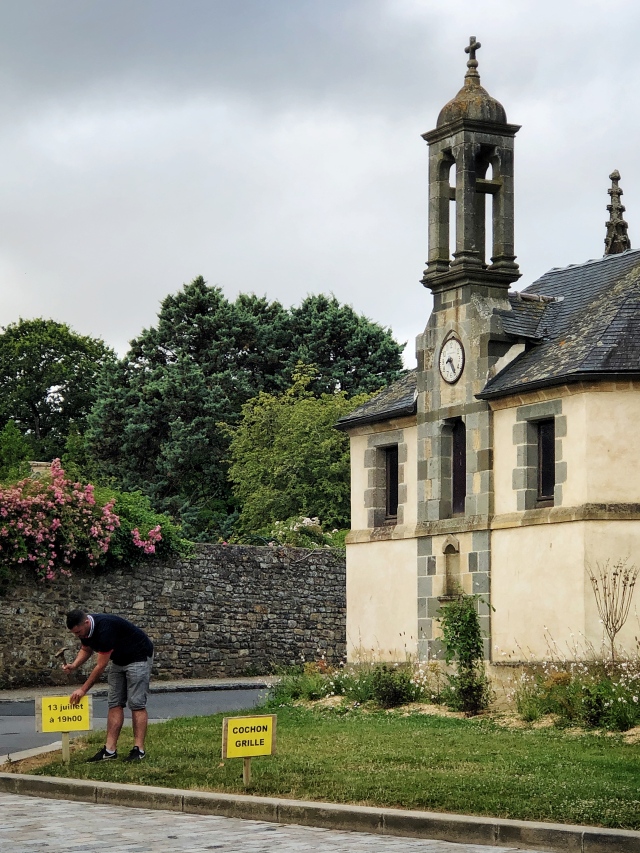 Milos Forman’s “The Fireman’s Ball” is one of my favorite films of all time. Until coming to Brittany this summer, I had no idea such events still took place anywhere. You can find quite a few “Bal des Pompiers” during the week prior to Bastille Day, where bands play and people sit along river quais or in public parks dancing and eating the local staple, Moules et Frites.

If folk life isn’t your thing, then maybe you’d go for the classical music concerts several times a week, in one medieval church or another. Or, Celtic rock concerts closer to the cities (no thank you).

The Inter-Celtic extravaganza takes place every August in Lorient, too far for us to reach this time. But maybe next year.

I spend as much time as possible pursuing my interests in global culture, photography, arts and politics.
View all posts by kmazz →
This entry was posted in Bretagne, Brittany, culture, expat, Finistère, France. Bookmark the permalink.