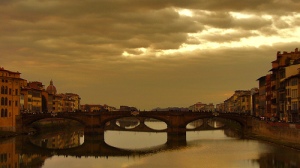 It’s like an overgrowth of algae, too much of a good thing. An infestation of indestructible pests. A herd of Michelango fans. A party of gelato seekers.  A siege of shoppers.

What they miss in descending on Florence in droves is any idea of the pleasures Italy’s Renaissance capital used to offer as an experience, one for which I suffer a desperate nostalgia.

The great works of art were seen in a context that is forever gone. The living city that was Florence then has been transformed into an open air museum, with many commercial enterprises complicit in crassly merchandising a unique artistic heritage. Instead of small family owned shops specializing in artisanal goods circling the Duomo, there is a crowded gelateria every few steps, a “typical Tuscan” trattoria betraying its true intent in its bland, watered down table wine, and the ubiquitous tourist mart selling obsence renderings of the David and other useless knick knacks. You can’t orient yourself along the streets, each one notable for its historic landmarks, because of the crowds blocking sightlines, scarring the views like the graffitti defacing the buildings themselves.

Yes, it is a very good thing for travelers that the churches and museums are now open for more hours in a day, even if the price of entry is higher. Yes, it remains important to go, just once or twice, if you love art and want to add to your personal catalog of important works seen.  But Florence today, despite its rightful prosperity, has been deprived of what is ineffable, immeasurably valuable, and probably irretrievable.  It is what used to cause visitors to return again and again. I’m referring to its core — the unmerchandisable authentic Tuscan-ness.  It was expressed in Florence’s pride in being the safeguard of treasures, in its heritage as a center of craft, its ability — developed over centuries! — to suggest to visitors the meaningful rituals of a human-centered daily life, in its unstated curatorial role as an arbiter of balance in all things, and the assurance that its local culture held values of relevance to their nation and the world.

Sad to say, it is as much my fault as theirs. How many times have I gone? Countless. Before Ryan Air’s one euro flights brought the sun-starved northern European masses to Italy on every day of the year and destroyed the concept of “off season”,  I enjoyed a rather elite status when I visited Florence. However, I liked it the way it was, without asking for more gelato or a less frustrating bureaucracy at the museum board.  The shortcomings made up a fair price to pay to be able to take a desultory stroll, that would inevitable yield discoveries, in the silent repose of the midday pause which today doesn’t even exist.

Today there are just too many of us. We’re a murder of tourists.

Add to that a nest of thieves. My last activity before retiring to my hotel to prepare for the next day’s flight was to hop on a city bus, where I was very professionally and cleanly robbed of my wallet.  The municipal elections are focused on issues of crime and loss of quality of life.

So I for one volunteer to no longer be part of the problem. Ciao.

I spend as much time as possible pursuing my interests in global culture, photography, arts and politics.
View all posts by kmazz →
This entry was posted in culture, Travel, Uncategorized and tagged Firenze, Florence. Bookmark the permalink.