From  Nice, we are 25 miles/40 kilometers to the border with Italy. Once there, you can visit remote towns like Apricale or Dolceaqua for fine views, honey and other mountain specialties, cut through the Apennines to sample the famous red wines of Piemonte, or head along the narrow flat seacoast towards the historically significant, big city of Genova. A ticket on the FlixBus to the latter is 16 euro round-trip, so what’s to stop one from taking a short break? 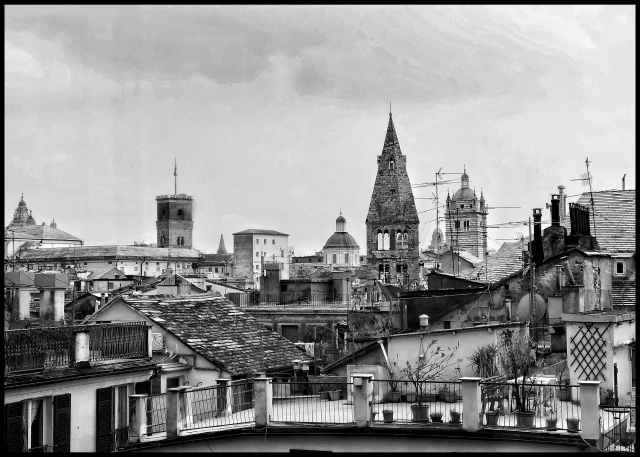 Genova has figured large in my imagination for its Navy’s role in medieval trade, on the Crusades, and for its outsized impact on European history, less than for its navigation schools and Christopher Columbus. A scattering of historical anecdotes gleaned here and there — the Genoese Navy’s battles with that other naval power Venice for domination of Mediterranean trade routes, its defenses from Muslim attackers, its outpost in Constantinople (now Istanbul) from where it sailed to drop its militarized traders off to venture along the Black Sea and Silk Road, its role in bringing plague and Circassian slaves to Italy — made me hunger for a fuller picture.

Unfortunately, its only history museum is devoted to the local cricket and soccer team. Skipped that one. So one has to wander the medieval quarter, explore the interiors of the massive Palazzi that served as homes for the wealthy and powerful of the late Renaissance, stroll through the humble churches that were transformed into Baroque displays of ostentation and conspicuous consumption during one of the city’s various heydays, and visit the old Port  imagining hundreds of sailing ships waiting to enter the harbor to conjure up a bit of what was. 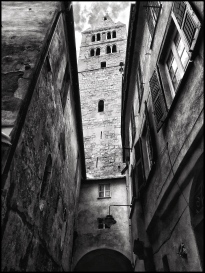 There is not a lot of painting and sculpture of the highest order to draw one to Genova, but I was delighted to see an outstanding painting in a church by Orazio Gentileschi (father of the famous Artemisia), and a lovely exhibition of Fulvio Roiter photographs.

Today, like much of Italy, Genova is down on its luck. I felt it needed a good scrub. It doesn’t seem to bustle so much as mark time. Trafficked women from Africa and beyond sell themselves from morning until night on every corner of the medieval quarter, standing out from the gray-haired women shopping the food stores, the few tourists and locals on errands. Perhaps Genova will undergo another rebirth, in a new economy, later this century.

Now, being in Italy, there is no shortage of gustatory delights to be found, and there is no shame in lingering on a dish of fresh fettuccine and almond, pistachio and lemon pesto at the Ombre Rosse, or the creamy pesto pasta at Sa’ Pesta. My favorites were the savory pies of pumpkin, carrots and onions and chard and ricotta. A chilled organic Vermentino white, cultivated nearby, is the perfect accompaniment.

If I am ever going through Genova on a trip to Italy, I’ll make a stop for some of those.

I spend as much time as possible pursuing my interests in global culture, photography, arts and politics.
View all posts by kmazz →
This entry was posted in expat, food, Genova, Italy, Travel. Bookmark the permalink.