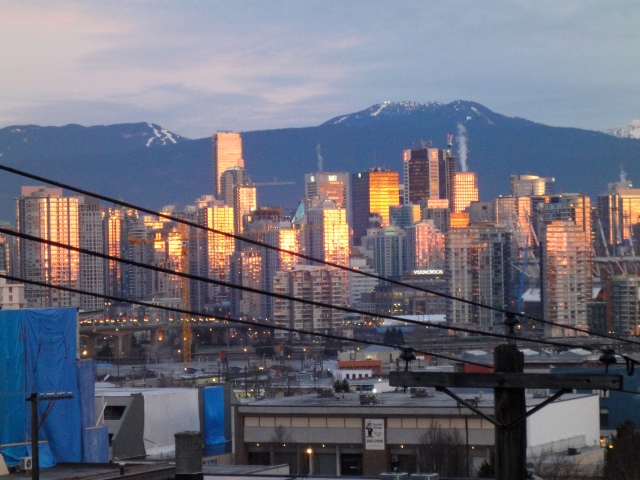 We are entering week six, with one week in Portland to break it up, and are getting over the stunned zombie like ordeal of the move. Vito the Lagotto has his favorite spots for a good snore, and we are in the walk, work, gym, shop routine in our little urban microcosm of the Mount Pleasant neighborhood.

So I’m keeping track of what we find to be the net pluses of living in Vancouver, versus Portland, or the US or anyplace else. These are factors that go beyond the obvious, e.g. great views.

French radio and television. We love the wonderful French-Canadian pop, rock and jazz played on this station. OK, some of it is ersatz Jacques Brel or Charlotte Gainsbourg, but most of it is interesting and fun. Canada has great music bands and jazz festivals, and Montreal produces a lot of it. Listening to the station also helps scrape the barnacles off the French pathways in my brain, so soon I’ll be able to catch the band names and song titles more easily too.

Global context. I’m pretty good with languages and accents, but every day here I overhear some that I do not recognize at all. It’s a good reminder that the world is infinitely varied and mysterious. And because of Canada’s more expansive foreign policy, it’s joltingly refreshing to see uncomplicated references to Cuba, a favorite inexpensive vacation destination. (And you can buy Cuban cigars here, for those of you who pine for them.)

Public transportation! I had no idea the Canada line and Skytrain were so extensive. And we live in-between them, so combined with the great bus transport we can get anywhere without a car. Walking along the seawall we discovered several stops for the cute little Aqua Bus that crosses Burrard Inlet and makes the jaunt from the West End waterfront to North Vancouver’s Lonsdale Quay (and nearby Persian neighborhood with its markets, nut shops and bakeries and restaurants).

The city grid. We were aware that the city had rejected highways through town as part of its urban planning, but we didn’t realize what this actually meant for quality of life. It means traffic always flows. It means there are sidewalks everywhere and one can walk the entire city. It means no loud highways marring an otherwise pleasant meander. And it makes possible safe bike passage zones through neighborhoods.

Ladies Only gym rooms. I still don’t understand how this evolved, but we noted in several of the gyms we visited that they offered workout rooms for women. At our gym, this room has a large sign outside basically telling men to stay out. My theory is that the practice arises out of Canada’s diversity and tolerance, because it allows women who are culturally inclined to be extra modest to have the same chance as everyone else to work out in peace.

More later, I am sure.

I spend as much time as possible pursuing my interests in global culture, photography, arts and politics.
View all posts by kmazz →
This entry was posted in expat, Uncategorized and tagged globalization, public transportation, urban planning, Vancouver. Bookmark the permalink.

5 Responses to An expat in Vancouver first impressions: Pluses