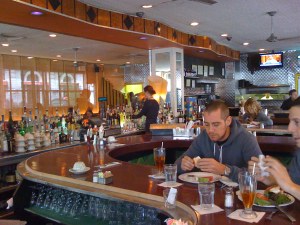 I discovered a diner in lower Manhattan that will now be my favorite breakfast eatery when I’m in New York. Smack in the middle of a very trendy area of cafes, bistros and food markets, not to mention boutiques, this diner is free of pretensions to anything but what appeals to mainstream New Yorkers. I wish I could have recorded the ordinary, non-ironic conversation of the two men in the booth behind mine. Posh accents they certainly did not have. Deliciously authentic to New York, they were so rich I could have listened to the strange music for hours.

My male dining companion pointed out that virtually every customer was male, while a bevy of very congenial and leggy waitresses staffed the establishment.  A little nod, a little wink, a little pat on a shoulder — all meant an extra 20 percent in the tip, he surmised.  The diner was like walking into a “Mad Men” script in the way it unabashedly harkened back to a pre-feminist era. In bucking the trendy, it was strangely mavericky.

So later in the day while in an airport stupor, I checked reviews of the Biden-Palin VP debate from the night before.   And what do I learn? The “wink” is back.  And I was not the only one to take it as bad news for women.

I spend as much time as possible pursuing my interests in global culture, photography, arts and politics.
View all posts by kmazz →
This entry was posted in Uncategorized and tagged feminism, Palin. Bookmark the permalink.